In the City and County of Honolulu, Department of Design and Construction, Civil Division Remediation Plan - "Phase 2" continues repairs using a system of tieback anchors to stabilize the top soil layers involved in the slide. 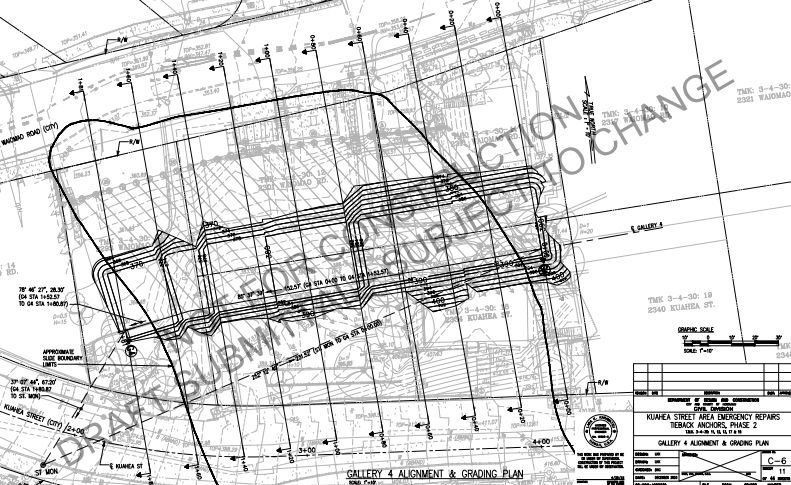 The City Department of Design and Construction has offered the following updates - On Sept 24th Director Yonamine and Geolabs President Lim delivered a presentation to the community over zoom.  The City DDC has also established a website with a fact sheet and updates on the project:
​http://www.honolulu.gov/cms-ddc-menu/site-ddc-sitearticles/38609-kuahea-street-area-repairs.html

The City and County of Honolulu, Department of Design and Construction, Civil Division has developed a remediation plan with "Phase 1" focused on emergency repairs using a system of tieback anchors to stabilize the top soil layers involved in the slide.  The image below from the report shows the shaded area where tiebacks will be installed. 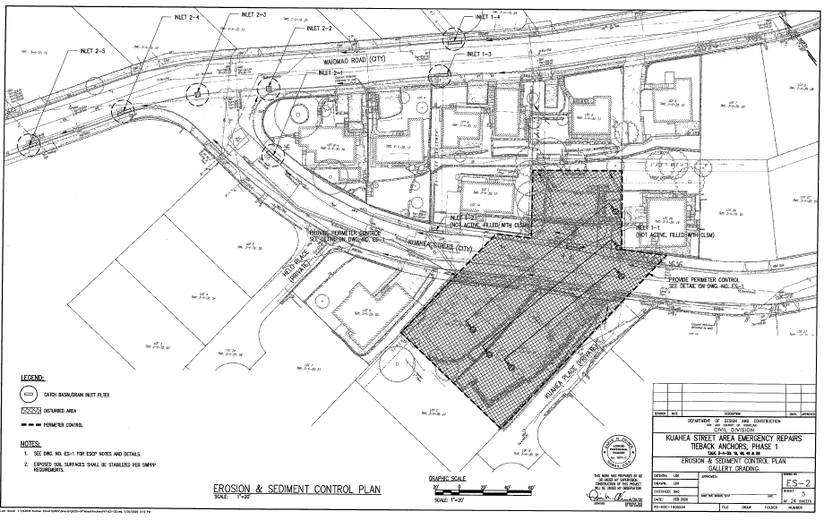 In early 2020 (before the Covid-19 shut downs) Neighborhood Board Member, and history teacher, Shane Albritton shared this valuable presentation on the history of the quarry, the subdivision development, and subsequent landslides.
Just a few highlights are shown below.

Dissatisfaction with the city's mediation of infrastructure damage and factors increasing risks to local properties have led several home owners to sue the city for damages.  As of 2020, 5 properties have settled lawsuits with the city, the city offered to buy one property and is in mediation on the seventh while another five lawsuits remained active (outlined in the map below). 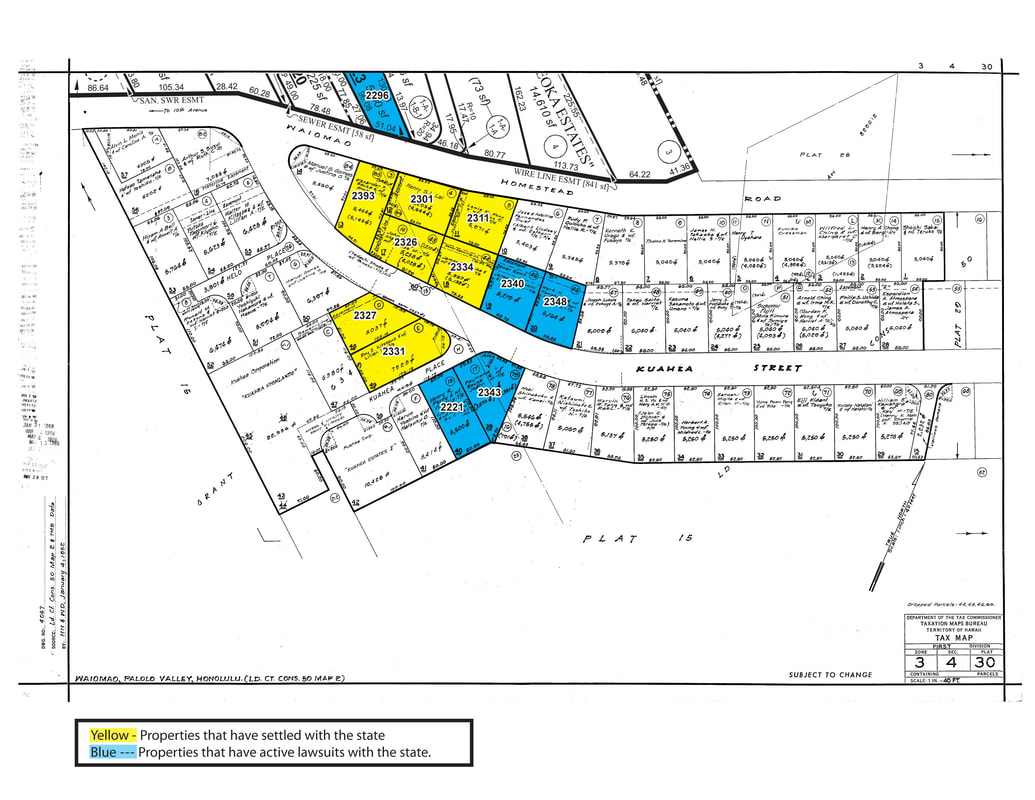 In 1994, the city purchased three homes that were damaged in earlier slides in the Waiomao-Kuahea area.  These properties were turned over to the Division of Forestry and Wildlife to be set aside as green space.  It was stated that an open space buffer zone would "be more economically cost-effective to the State of Hawaii than mitigative measure to prevent future rock slides".  While it's encouraging that land owners were compensated for their uninhabitable properties, it appears that the state / city took the most economic way out rather than protecting other properties from future harm.

Dennis Oda reported in a 1996 Star Advertiser  article that "A Circuit Court jury awarded the 13 families living on Ailuna and Leighton streets a total of $6.7 million in 1994 after determining the city was negligent and liable for breaching the contract to maintain the sewer line running through the neighborhood  The homeowners successfully argued that cracks in the line allowed liquid to slowly seep into the soil and hasten the slippage."

Mapping the Susceptibility to Slow-Moving Landslides on O'ahu

A thorough analysis of landslide risk is presented in Elise Leroux's 2018 Maters Thesis in Geoscience at the University of Hawaii, Manoa.  Through mapping, modeling, and expert input, this work shows that steep slope, vertisol (highly expansive clay-rich soils), and high water infiltration combine to create elevated risk of the slow moving landslides we're plagued with in the Waiomao-Kauhea area.  Several other slide areas in southeast Oahu were also a part of this study, and it is worth noting that city action has helped other slide-impacted neighborhoods including Aina Hina and Manoa. 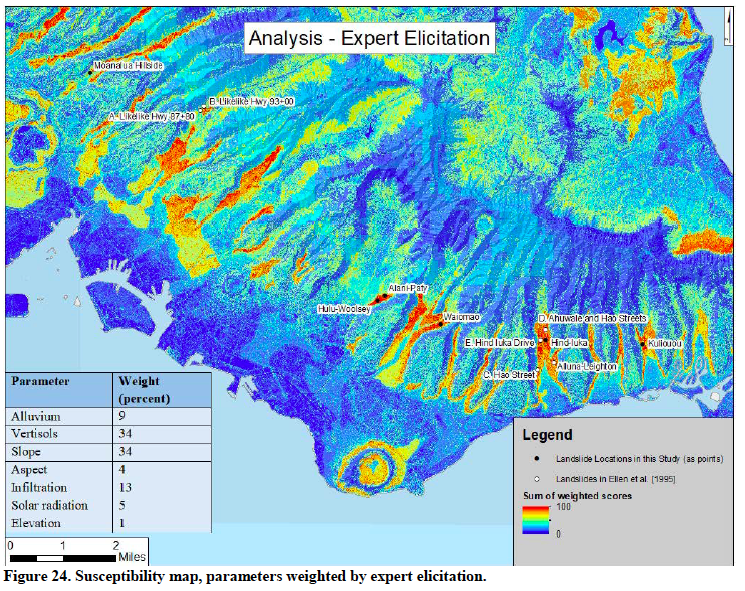 USGS Report on Vertisols and Other Landslide Risk Factors

A 1995 report from the Unites States Geological Survey (USGS) explained the formation of vertisol soils, and other risk factors associated with slow-moving landslides on O'ahu.  The manner in which the valley filled for construction after quarry activity likely exacerbated the risky situation.

Since 2000 Geolabs has been monitoring movement in the Waiomao-Kuahea area and has produced 29 geotechnical monitoring reports (available for download below).  Reports show a dramatic increase in the amount of ground movement in this area since 2016.  The map below shows the many areas involved in the current slide and/or requiring study of potential earth movement (Sept 15 2020 Geolabs Report). 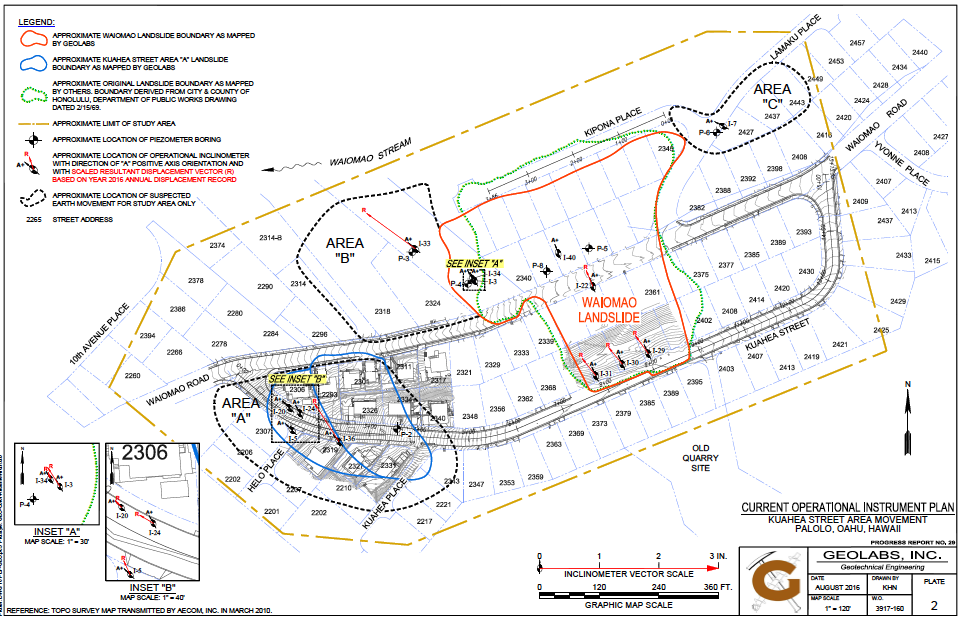 Report on Causes and Remediation of 1959 Landslide

Built on the remains of rock quarry, the Waiomao-Kuahea neighborhood had a history of ground movement, even shortly after the subdivision was built in the 1950s. 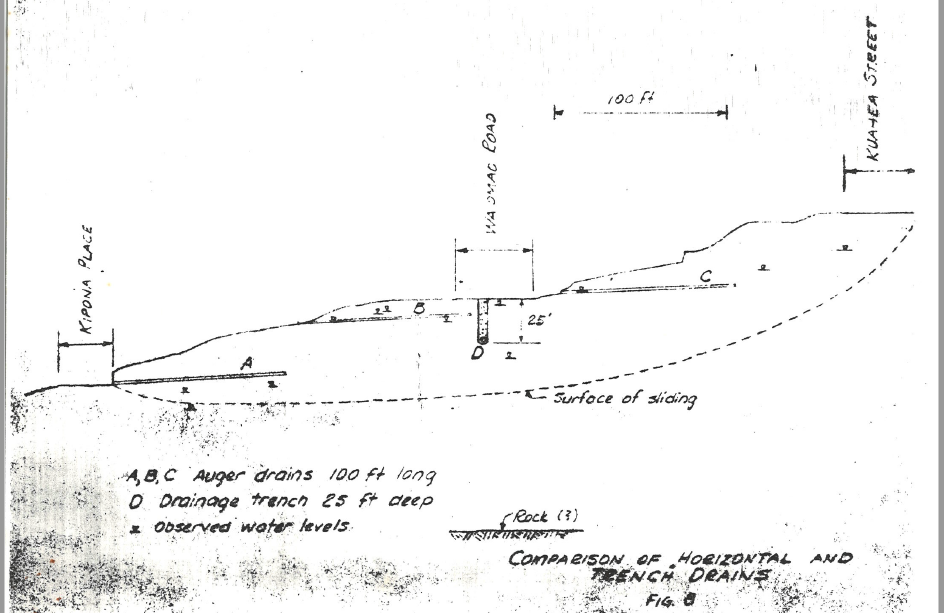